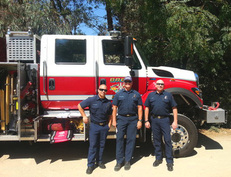 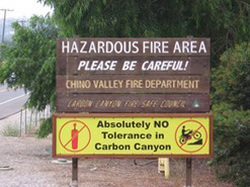 Carbon Canyon Safety Sign Unveiled
On July 14, 2011 new brightly colored safety signs were unveiled along Carbon Canyon Road. These signs were made possible by the tireless efforts of CCFSC members Reyna George, Ray Marquez, Bob Bacin and Hi-Way Safety Inc of Chino who graciously donated the design and labor cost.  These brightly colored metal signs with the anti-graffiti coating will be attached underneath the existing signs that greet motorist entering Carbon Canyon from both Brea and Chino Hills. 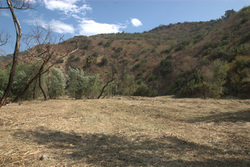 Carbon Canyon Fuel Reduction and Arundo Removal Project
This project targets roughly 25 acres of Arundo Donax in Carbon Creek (looks like bamboo or giant corn stalks). Funding for this project is through a grant initiated and coordinated by the non-profit group Hills For Everyone and CCFSC members.  In 2009 the City of Brea put up $25k before the grant was secured so the project could move forward. The grant was later approved  for $40k and the work is ongoing.
Proudly powered by Weebly